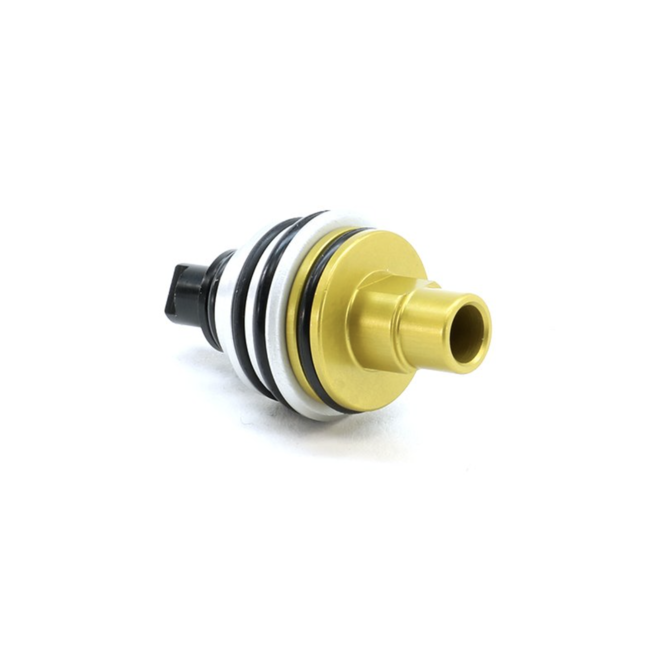 The Poppet Valve is the part which controls air flow through the Fusion Engine™. The valve is available in different levels of restriction to limit or maximum air flow down the barrel which promotes either higher air efficiency or higher velocity, depending on which valve you go with.

How does it work?

The standard Black poppet valve for the Fusion Engine™ allows the maximum amount of air flow through the system and it is the nozzle which restricts the flow into the barrel which varies the velocity. This gives you a wide range of velocity adjustment by simply changing out the nozzle to shift the velocity range of your rifle up or down in large increments.

The low flow poppet valve does what the name suggests and restricts flow at the valve itself so it allows less air through. Therefore the main restriction is back further in the system instead of right up front at the nozzle. Normally, with the nozzle being the restricting point, there is air backed up in the section between the poppet and the nozzle which will only be able to vent out as fast as the nozzle's restriction allows. If a more restrictive nozzle is needed to keep the muzzle velocity within field limits, there will still be air pressurized in this section after the poppet valve has closed and the BB has left the barrel so it is wasted. Since it is the poppet valve which turns the air flow on and off, having it being the restricting point instead of the nozzle conserves air since less air is allowed through at once.

The low flow poppet also helps improve how smoothly air flows down the barrel since it has time to expand slightly in the system after it goes through the valve so there is less turbulence behind the round which can improve accuracy slightly. With the poppet being the main restrictive point, the nozzle doesn't have as much of an affect on restricting flow although it can still restrict if the flow reaching the nozzle is still greater than the nozzle can let through at once. This is why you typically use a higher flow nozzle in conjunction with the low flow poppet such as a Black, Silver or Red nozzle.